In the early parts of the 20th century, Real Madrid first played at Campo De O’Donnell, but then moved to the larger Campo Chamartin in 1924. In 1943, Chamartin had already become too small again, and club-president Santiago Bernabéu decided that Madrid needed a new and modern 100,000-stadium.

This new stadium got built at the same site of Campo Chamartin. Construction began in 27 October 1944, and on the 14th of December 1947 Estadio Santiago Bernabéu officially opened with a match against Portuguese champions OS Belenenses (3-1).

The stadium was initially still called Nuevo Estadio Chamartin. On 4 January 1955, after the General Assembly of Members Compromisaros, it was decided that the stadium adopt its present name in honour of club President Santiago Bernabéu.

At that time, Estadio Santiago Bernabéu consisted of two uncovered tiers that could hold just over 75,000 spectators. Capacity was further increased to 125,000 in 1954, when one of the long sides got expanded with a third tier.

During Euro 1964 Championships, Santiago Bernabéu hosted one of the two semi-finals and the final between Spain and the Soviet Union (2-1).

Towards the end of the 1970s, the stadium had already started to age, and at one time even plans were made to build a new stadium in the north of the city. However, with the perspective of the 1982 World Cup it was instead decided to renovate the Bernabéu, which included the construction of a roof that covered the three two-tiered stands and the installation of seats in half of the stadium. As a result, capacity was reduced to 90,800 places.

During the 1982 World Cup, Estadio Santiago Bernabéu hosted three matches in the second group stage and the final between Italy and West Germany (3-1).

In the 1990s, UEFA required the stadium to become an all-seater, which would have reduced capacity to 50,000 seats. Club president Mendoza therefore started an extensive redevelopment program that included extending the third tier over the entire stadium, the creation of corporate facilities, and four access towers in each corner of the stadium. Works started in 1992 and were completed two years later. 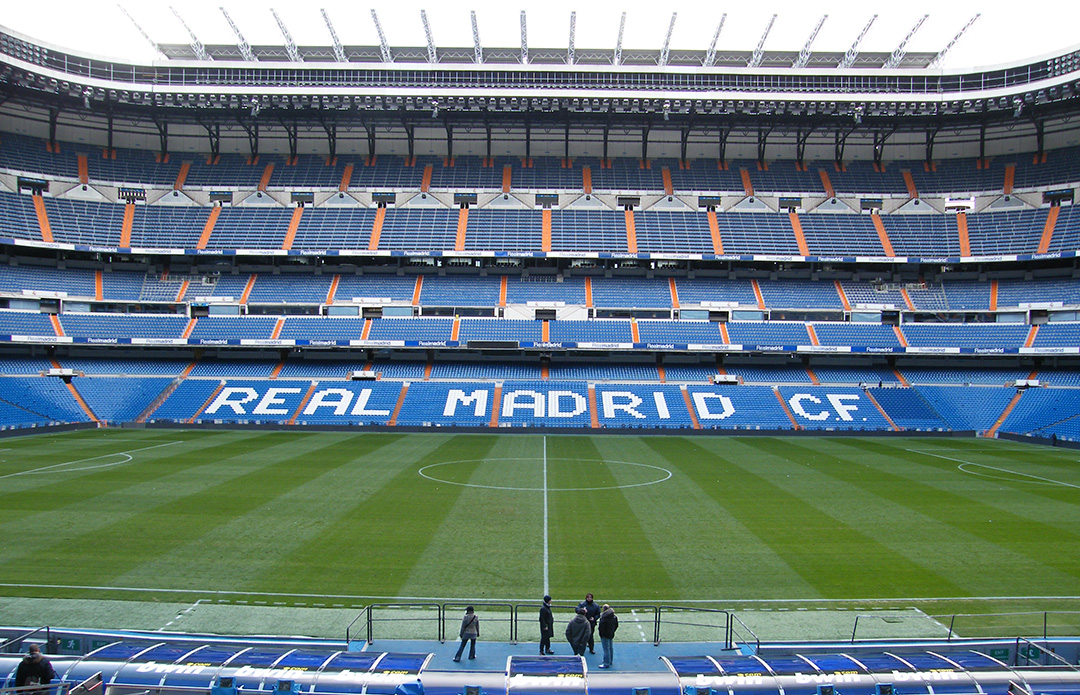 In the summer of 1998, and chaired by Lorenzo Sanz, the Santiago Bernabéu adopted an all-seating arrangement, bringing its capacity down to 75,328 spectators.

When Florentino Pérez became the president of Real Madrid, he launched a “master plan” with one goal: to improve the comfort of the Santiago Bernabéu and the quality of its facilities, and maximise revenue for the stadium.

Pérez invested €127 million in five years (2001–2006) by adding an expansion to the east side of the stadium, as well adding a new façade on Father Damien street, new costumes, new boxes and VIP areas, a new stage in honour of the east side, a new press area (also located on the east side), a new audio system, new bars, integration of heating in the stands, panoramic lifts, new restaurants, escalators in the tower access, and implementation of the multipurpose building in Father Damien street.

Following the enlargement of the lateral east side and the creation of new galleries, the capacity of the Santiago Bernabéu was 80,354, all seated. The last change was an increase of about five thousand to a capacity of 85,454, effected in 2012.

In its history, Estadio Santiago Bernabéu has hosted four European Cup and Champions League finals. The first final was in 1957 between Real Madrid and Fiorentina (2-0), the second in 1969 between AC Milan and Ajax (4-1), the third in 1980 between Nottingham Forest and Hamburg (1-0), and the last one in 2010 between Internazionale and Bayern Munich (2-0).

A €525 million renovation project was set to begin in summer 2017, but began in 2019. The capacity will remain at 81,000 seats, but the height will be increased by ten metres and a roof will be added. The club is expected to sell the naming rights to the renovated stadium.

In order for the project not to get in the way of playing matches, the team will use Roman techniques with raising the top, which will make it easier for the works to continue while the season is underway and there are matches once or twice a week. "The project is complex because it will not stop the football and therefore complicates the works and design, which has a roof that encloses the whole stadium. They are going to lift the roof like the Romans did, but with modern technology. They will raise the inner ring by string-pulling with hydraulic jacks, bridge technology and ski lifts in a short period of time in the summer to respect the sporting calendar," said Tristán López Chicheri, the individual in charge of renovation.

Chicheri believes the renovation will bring tourists to the stadium all year round, with many attractions planned. The stadium is supposed to have more restaurants, a shopping centre and a hotel, with some rooms having a view of the pitch. 'Digital stadium of the future' will be equipped with a 360-degree screen and retractable roof. "It is not only on matchdays that it will be used – there are venues like the Bernabéu that are in the middle of the city and it is a shame that they have no life beyond 35–40 matches a year," said Chicheri.

The areas around the Bernabéu will be rearranged: the Plaza de los Sagrados Corazones will be removed to be replaced by 6,000 square metres of gardens.